A Word From Our Chair: What’s the deal with Iran?

Like me, I expect you are closely monitoring developments in Syria and following some of the larger questions related to Iran. I’ve received lots of insight from the professional team at CIJA and thought you might be interested in some of their thoughts about the significance and implications of these events. As important, I think the current situation lends itself to the active engagement of the pro-Israel community, so I flag opportunities and suggestions about your direct involvement – and I hope you will respond to the challenge.

Expectations of direct confrontation with Iran have been growing for weeks. The missile attack last night, linked directly to the Al Quds (Iranian) Brigade, represented the first undisguised aggression following several more circumspect actions by Iran. Thankfully, the missiles did no damage as they were either intercepted by Iron Dome or allowed to fall harmlessly in open fields. 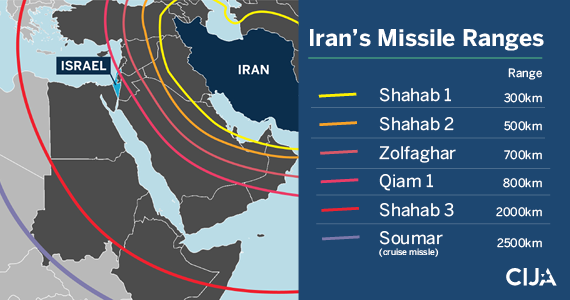 In defence of Israel, the IDF launched its largest counter-strike in decades – destroying more than 70 Iranian military installations established in Syria. It dealt a heavy blow to Iranian capabilities but did not, by any means, eliminate the threat.

What is especially noteworthy is the reaction from the international community. Western countries were quick and unambiguous in their condemnation of Iran, correctly identifying the Iranian regime as responsible for precipitating the clash. This is true even of such countries as France, the UK, and Germany who favour a continuation of the nuclear agreement with Iran despite the U.S. withdrawal. Canada joined the chorus of those harshly criticizing the attack and re-affirmed Israel’s right and responsibility to respond to such acts of aggression.

What is startling, perhaps even unprecedented, is that an Arab nation, Bahrain, also joined in the condemnation and explicitly endorsed Israel’s obligation to respond forcefully to the Iranian provocation. In his tweet in Arabic today, Bahrain’s Foreign Minister Khalid bin Ahmed Al Khalifa wrote:

As long as Iran changes the current situation in the area and exploits other countries by using its power and missiles, then every country in this region—including Israel—has a right to defend itself by destroying the source of danger.

In a related development, several Sunni Muslim states signaled their support for U.S. President Trump’s decision to abandon the nuclear agreement. Two important things to draw from this are:

1- the comfort with which various Arab and Muslim states are signaling an alignment of their interests with those of Israel is expressed more frequently and openly; and

2 – this emerging “undeclared” alliance has implications for other issues, foremost among which is the Palestinian file. Arab and Muslim states have signaled their impatience with – and opposition to – the Hamas-choreographed “rallies” in Gaza. Support from within Gaza for a climactic violent manifestation to mark the “Naqba” has dropped significantly, directly commensurate with expressions of disdain for Hamas – the Gazan-based Iranian proxy. And, the overall ‘Question of Palestine’ has been marginalized not only in the Arab world but also in the international community in general. There is a growing appreciation amongst even PA (Fatah) circles that Palestinian leadership have painted themselves into a corner: an untenable anti-American position that offers no other constructive option to advance their interests or seek support for the Palestinian agenda.

Is it possible that Donald Trump, the Disrupter, will push these two critical issues down a more productive and constructive path? Too soon to tell. But it would be positive to see recent developments result in a situation where Iran cannot translate its nuclear and hegemonic ambitions into reality; and the return of the Palestinian leadership to the negotiating table to work out a real, sustainable, and comprehensive deal with Israel – one that benefits from the endorsement of other actors in the region.

There is a role for all of us to play in encouraging Canadian support for such outcomes. I am repeatedly amazed at the impact of grassroots communication with the political sector. The apology from the Canadian government this week for the St. Louis incident is just the most recent example of this impact.  I am convinced that our community does not appreciate the potency of its outreach to the government, news organizations, and the like. If it did understand the powerful impression such interventions leave on holders of public office, everyone would send a message, write a letter, make a phone call, or post a message to Facebook.

And that’s exactly what I’m hoping you will do today.

P.S. We are stronger when we speak as a collective. Please follow us on Facebook and Twitter and encourage your friends to join our email list. As we have done in the past, we may ask our community to take coordinated action on these issues in the coming days.

P.P.S. In the next edition of A Word from Our Chair, we will talk about effective digital advocacy and provide you with some tips on how to advocate for Israel online. If you want to learn more about this today, click here.

A Word from Our Chair, Iran
Posted on May 10, 2018
© Copyright 2015 CIJA. All rights reserved.
Legal and Privacy Information